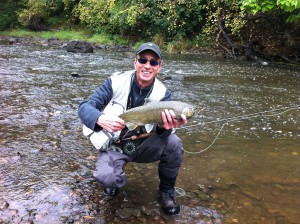 I have decided that the winter of 2013 has determined my maximum tolerance for snow, ice and arctic temperatures.   Normally my fall and winter days are consumed by chasing waterfowl and upland birds (for gourmet meals and fly tying materials) but this past season, drought, followed by early freeze and a ridiculous amount of snow put a halt to those endeavors. Not only was the winter particularly long, it felt lonely – even the Canada Geese ran south this season and the skies were void of their daily calls.

I don’t fly fish for salmon in the fall very often. Their arrival in Wisconsin tributaries coincides with start of duck season and, after a summer of fly fishing, I’m usually ready to trade the rod for gun and collect some flank feathers for wet flies. This season that was not an option at the duck property. Our marsh was dry, weed choked and the substrate cracked and dusty.

While being a single-father of two teen boys can be a mountain of work, it does offer a great advantage when it comes to prioritizing outdoor activities. When fish are only in a river, or ducks migrating through, for a very short time, you get while the gettin’ is good – or, at least, try. Despite my disappointment about the condition of the marsh, being and adaptable outdoor addict, I grabbed my oldest son and some steelhead gear and drug him off to Wisconsin for some big fish action.

The Root River, in Racine, WI, is an urban fishery. Fisherman on the river run the gamut of skill and technique. From fly rods to cane poles (I swear), I think I have seen nearly every method of fishing, short of seine nets, employed on that river. This river is not for the elitist, faint-of-heart or mildly narcissistic fisherman who believes they can fix the world with an argument.. Simply put, it is what it is. If you are looking for pristine waters and Hemmingway adventure – this is not the river for you. If you are looking for a day of fun, in close proximity to the Chicago or Milwaukee metropolitan areas, then jump right in. The fish are there. You can find fish away from the crowds and, most importantly, they fight like fish in any other river. 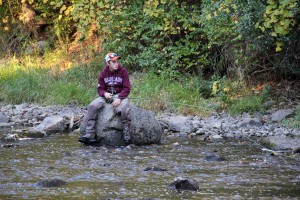 Just an autumn day on the river.

Of course, the drought had it’s impact on the river too. The water was low – just ankle deep in most of the riffle sections and as clear as I’ve seen this river flow. While the fishing conditions were hardly ideal, fish watching was at a premium. Salmon charged out of choke points on the river into the riffles – with water bulging over their backs and splashy wakes along their sides. Of course, this also made them targets for not-so-ethical hardware casters to target (cough, cough, snag). 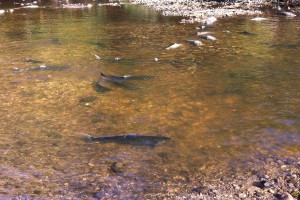 At one point in the day my son was swinging a fly to a holding fish and caster that was walking along the bank, ran out, cast over his fish with multi-treble bait of sorts and gave a yank. He hauled it onto the shore in a flash and whipped a filet knife from its sheath. Within seconds, the fish was beheaded and bagged, before he could mumble, “it was in his mouth.”

Thankfully, on most days the river clears of bodies by the afternoon and the runs are filled with fish and void of fisherman. By the end of the day, fish were caught, released and memories made. My son got his first sight of migratory fish in a river and in the viewing tank at the weir.   On the drive home he talked about, “next time.” What more could you ask for than a day that leaves a young man looking forward to the next time?