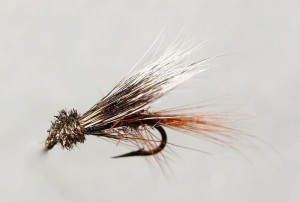 It was one of those perfect evenings on the Pere Marquette River in Baldwin, Michigan — the sun was sinking below the trees, stream temperature was in the mid 60’s, current flow was moderate and the canoe hatch was far downriver. As my fishing partner and I stood by the river to contemplate our plan of attack, we watched the flights of insects over the water as we rigged our rods. Further investigation revealed that the assembling swarm of mayflies were, in fact, Gray Drakes. Tying on suitable imitations, we split up and prepared ourselves for a nice evening of dry fly action from a spinner fall.

Time passed as we cast to “risers” and the insect flight became a cloud so thick, it actually cast a shadow on the water. After a period of frustration, it was decided that some type of emerger was responsible for the activity and, independently, we both switched to Picket Pin wet flies. While the rise form said “emergers”, few fish were caught but nowhere near what either of us expected based on the feeding activity.

As I studied the multitudes of rising fish, I had a moment of enlightenment. Maybe the spinners were just below the surface film and we were fishing to deep! Putting my little gray cells to work, I recalled reading somewhere about a “greased line tactic” and thought that it might work. I greased up my leader down to about 2 inches from the fly and began casting to rising fish. To make the story short, the change in method worked better than I would have ever thought. By the time we finished fishing, I had landed maybe 25-30 trout the biggest was maybe 15 inches. Comparing notes, my partner became quite upset when he found out that even though we used the same fly that I had out-fished him by about 30-2.
“I don’t get it. What were you doing different?” he asked.
“I used a greased line method” I replied.
“Why didn’t you tell me?” he asked.
That was when I explained to him one of my cardinal rules of fly fishing, “Je demande un avantage injuste, I replied.
It became obvious that he hadn’t paid attention in French class and that his patience was wearing thin. Before he considered whacking me with his fly rod I translated, “all I ask is an unfair advantage!”
Since then I have passed on the knowledge of my brilliant tactic to only a chosen few. I used it only when other methods had failed and secretly congratulated my self, smugly, on my “unfair advantage”. Recently however, my smug inner satisfaction was revealed as a delusion. I had been reading a book called ‘Greased Line Fishing for Salmon and Steelhead’ by Jock Scott and found out that my brilliant tactic dated from the 1940’s or earlier but was also a widely used tactic for Atlantic Salmon and dry fly fishing for steelhead. The method, described by Bill McMillan in his introduction to the book was:
“…that method of fishing in which a sparsely dressed low water style fly is cast cross-stream (including slightly up or downstream as conditions may indicate) and the floating line manipulated in such a way as to keep the fly suspended just under or in-surface on a slow swing that brings the fly downstream and cross-stream in such a manner as to avoid any drag that speeds the fly in an “unnatural” manner to the current. When fished correctly the fly comes to the fish broadside, or head pointed cross-stream, and this position is maintained through a delicate control of rod and line…”
This description seemed to describe my method. The author used two books to explain the greased line tactic in detail. The brilliance of Jock Scott was that he changed the usual sunken fly fishing methods for salmon and steelhead with silk line and added a dry fly option to use “greased” floating silk line into the bag of tricks.
There was the evidence in black and white. I was saved by the printed work and I had made an original contribution to fly fishing for trout. McMillan described perfectly the method I had independently discovered. I had come up with a new method, using modern fly line and leaders of keeping a wet fly right in the surface film. That’s my story and I’m sticking to it.
Je demande un avantage injuste
La Pêche est ma Folie