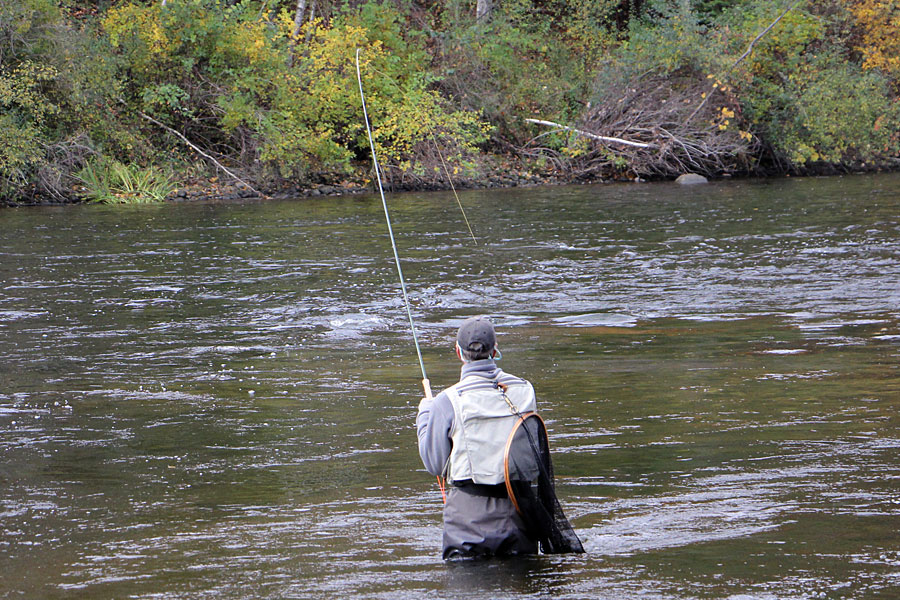 At some point in a career of swinging flies, you’re going to catch a fish on the dangle – and that unanticipated thump on the end of the line will nearly yank the rod from your hands.

With any luck, the drag won’t stick and a fear induced, Bassmaster Classic hook set won’t disengage the hook. Later, you will tell your friends that the squeal they heard was in fact a fierce battle cry and they will still laugh at your lie.

When the adrenaline rush finally subsides and your hands stop shaking, you’ll release that aggressive monster back into the current and think, “I’d feel better if that fish hit it on the swing.”

Let’s face it, a fish on the dangle just doesn’t feel right. Even though you drummed up that follow and hit from the depths, a dangle fish just seems a notch lower on the respectability chart. Not because it is, it just feels too easy.

My long time fishing partner is King of the Dangle. In the decades we have fished together he has caught more fish on the dangle than I care to count. If I had a nickel for every dangle fish he’d taken over the years by leaving his rod leaning over the back of a drift boat while packing his pipe or sipping a drink, I could buy a new Sage One rod tomorrow.

The fact remains, the dangle, as a consistent fish producer, is more than an accident – and the wet fly angler should at least wonder, “Why?”

By standard fly fishing thought process, a fly is best presented naturally – dead drift, drag free, blah, blah, blah – we all know the discourse. One could argue that most wet flies are bait fish imitations, so holding in the current IS a natural presentation. While this is true, it does not explain the dangled insect imitation that is holding in the water unnaturally, waking, and doing all sorts of shizzle a bug should not do.

Fish feed when certain parts of the “predatory strike” equation are satisfied in their brain. Size, shape, color and movement are all influencing factors. It is safe to assume that in the swing, any combination of those motivations triggered interest from the fish and they began to follow/stalk their prey. Despite the unnatural things that occurred after the fish decides your bait is something edible, the strike was already set in motion and the changes in the fly behavior of a dangled fly are not enough to turn them off. In fact, the helpless disturbance at the water’s surface could likely be the motivator that sealed the deal.

Over the years, I have not only become extremely patient when fishing out a swing, but take time to add a little motivation to the dangle with “ the drop back mend”.

When you have fished out your swing and feel your dangle has rested in the current for a sufficient amount of time, pull out an extra foot of line, roll your wrist over, and mend that foot of line on the water. Let the current pull the mend tight. Your fly will drop back in the current on a relaxed dead drift and then snap forward in the current – simulating the normal movements of baitfish holding in soft currents.

In addition to this mend, having had many fish swipe wildly at a fly as I strip in line to make the next cast, my first few strips are now slower and deliberate. In short, I really fish out the dangle instead of just patiently pausing.

If a dangle is good, a motivated dangle is better. Give it a try — I’m confident you’ll be impressed with the results.