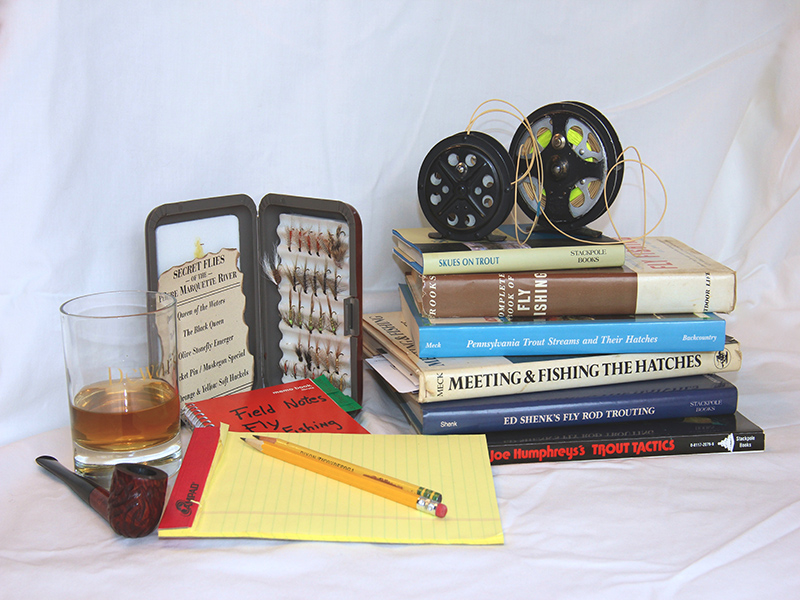 Seek after knowledge, go on to college

Two years ago I decided to visit some of the local trout streams near Harrisburg, Pennsylvania where I was introduced to The Way of a Trout with a Fly (thank you G. E. M. Skues). Despite the advance of civilization, the drive was a refreshing tour past Amish farms and rural countryside that, it seemed, hadn’t really changed since the 1960’s. I pulled into a parking spot near Falling Springs outside of Chambersburg and began to walk around. My past recollections were interrupted by an old gentleman who approached, looked at my out of state tag and said “are you supposed to be meeting someone here?”

“Well, I’m supposed to meet two lawyers here and wondered if you might be one of them. I tied up a bunch of flies for them to use. Would you like to see them?”

“Sure, why not” I said “but I wanted to see what’s changed since I last fished here”.

We began a conversation and walked back to his car. Lifting the hatch, he proceeded to show me his tied flies that he said worked real well on the local streams. He pulled out some large boxes of flies and soon I was flipping through delicately tied BWO’s, Sulphurs, Scuds and assortments of popular local flies. I found out that he lived just up the street and that he had been fishing this creek for over 40 years. I looked at some very nice flies, bought a few, but dodged his efforts to sell me other items from what looked like a mobile tackle shop in his trunk. Interesting chance meeting, I thought, and continued with my travels. About an hour later, as I drove past the parking area, I noticed his car pulling into the same parking area and saw him begin the same type conversation with other fishermen in the lot. Wow, I thought, was I just hustled by some geezer, promising treasured local knowledge in a parking lot! This guy might have a good thing going!

A streamside hustle may not be a part of your usual experience. However, chance meetings streamside are a common occurrence and usual involve an exchange of pleasantries. Often they provide tidbits of local knowledge and can also lead to lifelong friendships. If you read fly fishing literature, as I do, you invariably run across comments about how the author met so and so who inspired their lifelong involvement if fly fishing. I began to think about chance meetings I had over the back in the 60’s at the many Pennsylvania trout streams I fished in those days.

Was it really Vince Marinaro or Ed Shenk who directed me to some nice browns on the LeTort, and suggested the right fly?   Did Charlie Meck, in a parking lot at Penns Creek offer his comments on Green Drakes one evening? Could I have been fishing the same stream at the same time with Joe Humphreys (THE instructor from the famous fly fishing classes at Penn State) casting above or below me? I know that this is name dropping but I’d like to think it might have been one of them. Even today I run into well know (but new to me) writers, guides and local experts on the Michigan streams that have become my Home Waters. I’m sure that many times they were just fly fishermen engaging in pleasant conversation. These men folks were not stingy with offering advice to a stranger they met on stream.

Let’s fast forward to today. Last year my fishing partner and I had finished fishing a nice evening hatch on the Muskegon River in Michigan. We pulled into the Pine Street boat ramp and I stayed with the boat while he went to get the trailer. The usual 5 minute wait stretched to 10, then 15 and then 30 minutes and still no trailer. I was beginning to feel stupid standing there, holding the line to a boat and swatting mosquitoes. I saw some lights at the parking area and figured he was having some problem and went to investigate. I found him deep in a conversation with two other fishermen about the evening and, our specialty, wet flies. These guys were locals and, as the conversation developed, were trying to figure out the mysteries of wet fly fishing. We spent almost an hour talking with them, showing flies that we used, drawing diagrams and explaining fishing techniques. We all departed and hoped that we would see them on stream again (in daylight) and would be able to offer on stream instruction.

Will that happen. I can’t say. Was this a continuation of the past traditions of local knowledge being passed on from fisherman to fisherman. You bet. This is one of the fascinating things about the world of fly fishing and social interaction that we inhabit. Streamside knowledge, like the social interchange of Trout Unlimited and Federation of Fly Fishers meetings can be like our advanced class in fly fishing. Will I and my fellow fishermen (and women) continue in this same manner. I think so and it is part of our fishing DNA.