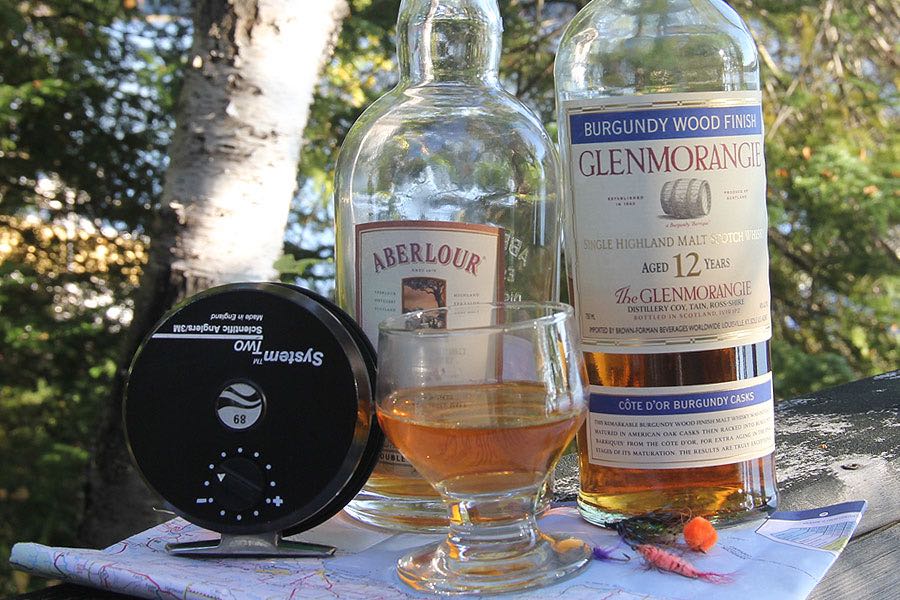 To paraphrase W. C. Fields, “ I never drink water, I know what fish do in it.” I have been warned by my editor not to pick on bass or carp fishermen so I will assume that every fly angler has a favorite beverage they drink to keep snakes away and that THE favorite drink is Scotch whisky. That’s right, spelt without the “e” as it should be. A few years ago, after a long day of trout fishing in Scotland, the Ghillie and I stopped at a local pub for a wee dram (which, by the way, is measured at 65ml or 2 oz.). I asked the young lassie behind the bar what she would recommend, “ Well sir, I see you have been fishing with Geoff and I know that he is partial to Dalwhinnie”.

“In that case, we’ll have two and put mine over ice.”

“Oh no sir, we never put ice in our whisky, only a wee drop of water. The water allows the whisky to breath, ice destroys the taste.”

Since then I have acquired a taste for single malt whisky. Recently I began to think about a perfect selection of “The Water of Life” (usquebaugh in Gaelic) to stock my cabin and complement the fly fishing experience. With over 500 single malts and numerous blended Scotch whiskies to choose from, I offer the following from a costly, but entertaining, education:

Finding the right Scotch for all your fishing situations can be an arduous task. It has been for me with all the freeloaders that I fish with. Enjoy the quest for YOUR perfect beverages and SLAINTE.