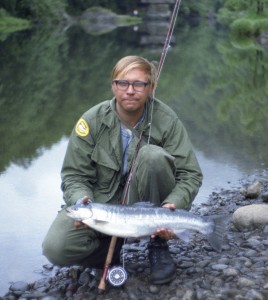 In my younger days, I used to take my corporate mandated vacations in a block and made every effort to go someplace and do something “new”.  In 1974, in the spirit of exploration, I ended up in Portland, Oregon with a young lady who, among other things, was willing to try fly fishing.   We visited some friends in Portland and one of them mentioned steelhead and their summer run as a chance to catch really bit fish on a flyrod.  With the words “big fish” ringing in my ears I looked for and found Ollie Damon’s shop in Beavertown, Oregon.   The shop is apparently still in business but the original owner has passed on.   Striking up a conversation with the proprietor, who was Ollie himself, I asked about fishing for summer steelhead and what gear I would need.  After purchasing various items he suggested and following his advice I headed for the Nehalem River and I have never forgotten his parting words;

“You have the gear but I have to tell you that it takes years to learn how to fish for these steelhead and the chances of a new guy catching one first time out are slim to none.”

Following directions, my partner and I headed off to the river in my Chevy van planning to camp out and try our luck.   The scenery in Oregon is amazing and, despite an early start, by the time we got to the river it was near dark so we set up camp in a clearing beside the river and settled in for a pleasant night in the outdoors.  Early the next morning I got up, gathered my fishing gear and rod-which back then was a Fenwick 6-weight rod and I headed to the river about 50 feet away.

I the morning light the Nehalem river was imposing.  Most of the rivers and streams that I had fished back east were 50 to 100 feet wide.  The Nehalem in front of me must have been 50 to 100 yards wide, dark, mysterious and had a decent current.  I was not sure how I could get a fly out into good water and didn’t have any wading gear.  With a “what the hell” attitude I made some tentative casts, figured I could get some distance and flailed away at the water. My technique was simple.  Cast as far as I could, feed line into the cast and let it swing out as far as possible and come back with a slow hand retrieve.  Ollie had coached me verbally so I did what I could trying to follow his suggestions.  Would It work?  I had no clue.

I made a couple of casts and figured out how to get enough line out and keep it under control.  Manipulating my line I suddenly saw a large fish leap into the air and thought “wow, that could be a steelhead”  My thought didn’t have time to clear my brain when the rod was almost ripped out of my hand and line began ripping through the guides.  I held onto the rod , realized that the leaping silver torpedo was on my line and watched an aerial display the likes of which I had never seen before from a fresh water fish.  What had I gotten myself into?!

I had a real fight on my hands.  If this is steelheading I was an instant convert.  I followed the fish from shore downstream, upstream, towards me and away from me.  I can’t describe the battle very well.  I do not remember a lot of it.  I was hanging onto my rod, and hopefully the fish with grim determination.  It was like I had a sailfish on the line without any backup.  I was going to land this fish sans net.  Suffice it to say I got away with it despite my ignorance of the “proper method” of landing a wild steelhead.  Since then, I think that I have never felt as elated as I did then over any other fish I have ever caught.

With my hands shaking and arms sore from the battle I was just staring at the fish when a sultry feminine vice behind me said; “What was all the yelling about”?

“Wait till you see the fish I just landed.  Look at this.”

She looked at the fish, looked at me and then gave me a big hug, you know the kind only a lady happy for her man can give you sometimes.  I asked her to get the camera and the picture above was the result.  Yes, we did eat that fish.  It was delicious.

A couple of days later I took one of the pictures over to Ollie Damon’s shop, thanked him for his advice and basked in the glory of his congratulations.  That was almost 40 years ago.  I have enjoyed fishing all over the United States for steelhead and I plan to celebrate my 40th year of steelhead fishing on the Manistee River in Michigan next year.  I’ve caught a lot of steelhead since then but none of them will ever surpass the thrill of my first one.  It was a blast.

As a postscript, I did not get the girl (it was fun trying), spent a lot of time chasing those hard fighting steelhead mostly in the Midwest, still don’t understand disco, rescued 25 cases of Coors and came home with my first ever black Labrador Retriever.  That 40 year love of labs also continues to this day. 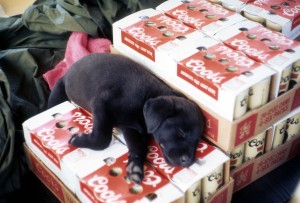