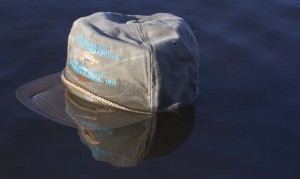 If you jump out of a perfectly good airplane, mountain climb, are in law enforcement or the military you expect that you might get injured, possibly fatally.  In fact for major sports participants the general statistics show that there are 9.5 injuries per 100 participants.  Football has the highest injury rate with hockey next.  I did most of the activities in the first sentence and avoided major injury (getting shot does count) but fishing doesn’t show up in the injury top 20.  Following the theory that hooking fish instead of people is the goal has served me well over the years.  I wear a wader belt, use a lifejacket in the boat and wade carefully.  A number of years ago my theory that fishing is a safe sport was radically altered.

It was a delightful evening on the Pere Marquette River in Michigan.  I was fishing alone but the motel owner knew where I was in case something happened.  The Pere Marquette is a great wading river.  It has great runs, shallow riffles and some easily avoided deep pools.  The sun was sinking below the treetops, the canoe hatch was over and the river was quiet except for the sounds of nature and rising fish.  It was a perfect evening, the kind where you wonder if fishing would destroy the serenity of the moment.  Anticipating good action I sat down on the river bank and was picking out suitable flies for an expected evening hatch.  Tucked up against the bank vegetation I was one with nature and practically invisible.

It was quiet enough that I could hear the rhythmic splash of the oars of a driftboat coming downstream heading for a takeout further downstream.  I was sitting on the inside arm of a lazy reverse Z curve with the curve running from the right.  I could hear the boat getting closer but, not wading yet, knew that they could pass right by with no problem.  I was tying on a parachute Adams as the driftboat rounded the curve and floated down towards me.  Expecting an exchange of pleasantries, I looked up and almost choked on my pipe at the vision that suddenly appeared before me.

A very nice looking young lady apparently had to provide inspiration to her rowing husband/boyfriend and had revealed her upper torso in the manner of an old sailing vessel’s bowsprit only in reverse.

Startled, She looked over at my camouflaged position on the bank, realized that it was too late to react and responded with a cheerful.  “Hi”

I almost said “nice evening”  but my brain actually worked and all I could do was  wave as they floated on by.  I watched as they floated down and made the reverse turn downriver and were gone from view.  The Pere Marquette sure has some fine scenery, but I never expected a mermaid in a boat.

With that surprising vision still clouding my brain, I picked up my FLY rod and waded out into the river.  Now the river here at the long arm of the reverse Z has a chute that runs down into a deep whirlpool before it turns to the left.  In my bemused condition I moved too far out and, with the water up to my waist, felt my feet lift and down the river I went.  Now I have slipped and skidded in rivers before and recovered without any problems.  Faster than I could react I was shot right down into deep water and unable to touch bottom.  I tried to float over on my back and shoot down into shallow water but that wasn’t working as I thought.  I soon found myself trying to stay upright.  I tossed the rod as far as I could so I could use both hands for movement then decided the fly vest had to go, slipped it off and tossed it to shallow water.  It promptly sank.

Still floating around I looked for any branches to grab.  There were none.  It was now getting a bit tough to continue to float.  The wading boots were keeping my feet down and I couldn’t make headway.  In fact I was going upstream back into the current chute and in a circle.  I was getting tired and also realized that, even if I yelled out there was no one there to hear me.  The drift boat that had caused my problem was long gone.  I was alone.

Trying to stay calm I examined my surroundings and suddenly realized that I was in the whirlpool but mistakenly trying to fight my way out in the wrong direction.  The idea that letting the current push me downstream was abandoned and, instead, I reversed myself and using a floating survival technique I learned in the military worked with the current flow.  My plan was to build up enough speed and shoot out into shallow water.   I tried a backstroke to build up some speed and widened the circle.  The water’s chill and my waning strength we beginning to make me nervous and on downstream turn I put my energy into it and succeeded in sliding far enough out of the whirlpool to get into shallow water and stood up.  I was still in a current but was able to throw myself forward and frog stroke enough to get into a position where I could crawl and pull myself onto a sandbar.   My could feel my heart pounding and laid there gasping for air.

A couple of things ran through my mind as I recovered somewhat.  My waders weighed a ton, My rod was somewhere, my vest and flashlight were somewhere else, it was just about dark and I was on the wrong side of the river for a walkout.  After a while I was able to stand up and located my vest and the flashlight it held.  Still breathing heavy I looked around for the rod I had tossed on shore and actually found it.  Now the objective became getting back across the river.  I was familiar with the downstream stretch so flashlight in hand I headed off into the dark.  I’m not that uncomfortable in the dark but it struck me that this night was as dark as I had ever seen.  Moving slowly in the dark I found a suitable stick and a place that I thought I could cross and felt my way slowly across to a shallow spot and sat down on the welcoming bank.  It  occurred to me that sitting on the riverbank was what had started this adventure.  Now I had to walk out.

Checking my vest I found that my pipe, lighter and tobacco were actually dry so I treated myself to a smoke and thanked the Good Lord for allowing me to get out of another harrowing experience.  I am not going into a description of things I should have done or any lessons I should have learned.  Suffice it to say that since then I have learned to concentrate on the task at hand and not let anything distract me—no matter how awe inspiring or interesting.

One day a young lady at leisure

Sat in a driftboat and gave me a seizure

She exposed her hide

A sight this fisherman will treasure