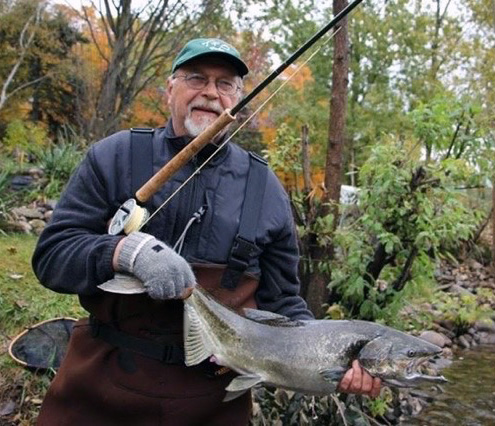 Spey rods and Switch rods are new to me. In Europe I saw salmon fishermen with extra long rods and figured, “OK big fish, big rivers you need a BIG rod”, sort of like boat rods for salt water. Fast forward to today. Steelhead fishermen on the West Coast have been using Spey rods for a number of years and, now, Steelhead and Salmon fishermen with Spey rods are becoming common on the Great Lakes tributaries. In fact, for the last couple of years the Great Lakes Fly Fishing Company of Rockford, Michigan has been sponsoring a “Speyfest” in Newaygo Michigan on the Muskegon River that draws a decent crowd of fly fishers interested in Spey tackle and methods.

In 2014, as the new owner of a cabin on the Muskegon River, I attended the 2014 “Speyfest” and, by the end of the day I felt like I had too much cinnamon whisky and a headache. After 50 years I had become used to terms like roll cast, reach cast, parachute cast and many others that are commonly used by fly fishermen. By the end of the “Speyfest” I was trying to understand casting terms like single spey , double spey , snap “T”, “D” loop, circle “C”, snake roll and anchor point. I was floundering (pun intended) through all the new terminology and almost ran back upriver to hide in my cabin. Thankfully, one of the fellows in the Sage Rods booth took the time to show me a number of these casts and let me try them out in the river. I calmed down and was hooked, which was probably the whole purpose of the “Speyfest” to begin with.

My friends at Great Lakes Fly Fishing Company offered to set me up and, with an opening question, almost caused me to head right back up to the safe spot in my cabin. With a straight face the sales guy said,“ Do you want to set this up for Scandi or Skagit? Do you want a Spey rod or a Switch rod?”

“You better tell me what that is quickly or I’m going to scream real loud.” Said I.

In the interests of avoiding the scene of a 70 year old melting down in their booth, a couple of their staff gently explained the whole thing to me in simple terms.

First, either method is Spey casting. In the Pacific Northwest, the casting involves deep and fast water and fishermen use heavy flies and sinking lines to get their flies deep. These methods and gear are what is called Skagit and used short heads on the line to throw the necessary line weight. The Scandi method uses a much longer progressive front head to throw the same line weight as a Skagit line. The Scandi heads are built more for a softer presentation using lighter flies. To me this means heavy flies, sinking line and deep water equals Skagit gear. Lighter (or smaller) flies, floating or intermediate line and shallower water equals Scandi gear. So I might use Scandi gear for the shallower Muskegon or Manistee rivers and Skagit gear on the Deschutes or MacKenzie out west. Finally I was told that Skagit casting is easier to learn than Scandi casting but that any rod would work with either method As far as Spey rods or Switch rods are concerned, Spey rods are about 13’ or longer for bigger rivers and longer casts; Switch rods are under 13’ for smaller rivers. In either case the rods have extended grips for two handed casting.

I felt much better and ended up with a Sage Z-axis about 14 feet long, a Lamson Konic 4.0 reel and Scandi lines perfect for the Muskegon. A few short lessons and two days later I caught my first salmon(but not last) in front of my cabin. After that it was like throwing a monkey into a banana plantation. I can’t wait for the spring steelhead fishing in March.