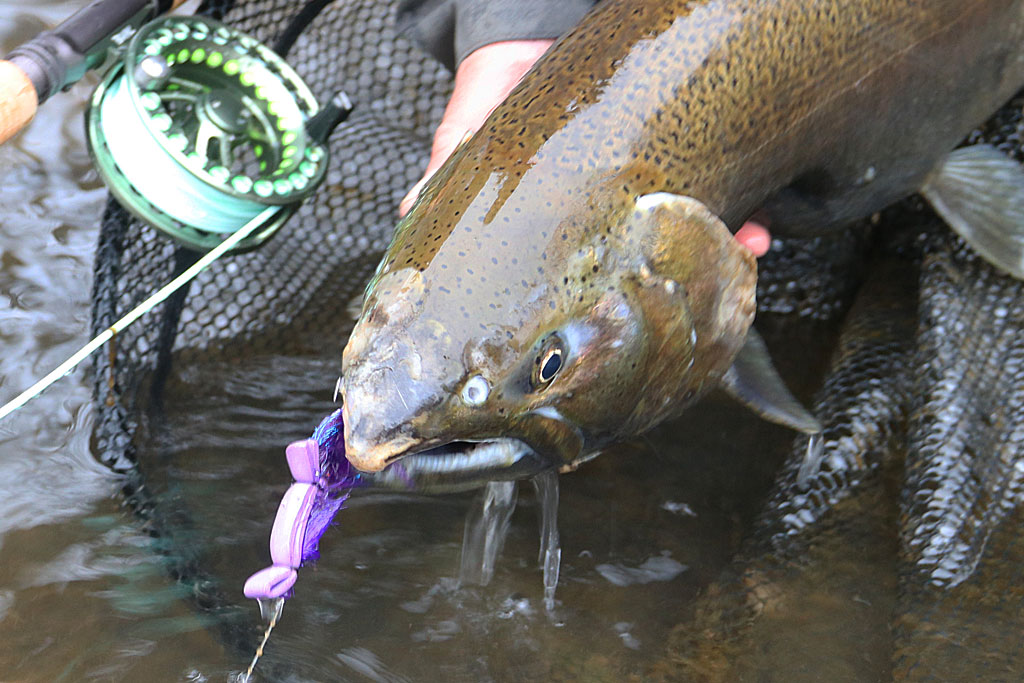 Great Lakes fly anglers have a history of treating salmon and steelhead different than their west-coast ancestors. For decades, third-coast anglers were convinced that steelhead would only eat egg flies bounced along the bottom until they made a commitment to using west-coast streamer tactics and were rewarded for their efforts.

It’s not surprising that salmon are treated in much the same way. Setting aside the anadromous vs potamodromous life cycle (a very salty topic), fly anglers continue to realize that the predatory and spawning habits of these migratory fish are more similar than they are different.

The first successful stocking of Coho in the Great Lakes occurred during the mid-60s using eggs taken in Oregon, Washington and Alaska – where Coho are commonly called Silver Salmon.   In Alaska, silver salmon are targeted by guide services and sport anglers because of their voracious propensity to take a fly. While most anglers target them using subsurface wet-fly patterns, it is very common to chase them on the surface with dry flies – using a dry fly pattern called the Pollywog.

In early November of 2017 I had the opportunity to fish with Bill Schlichemeier on the Root River in Racine, Wisconsin. Bill had come to Chicago to visit his daughter and we hooked up for a day of angling in hopes of finding some trophy, lake-run brown trout. Unfortunately, warmer than normal temperatures and drought conditions had severely delayed the fall brown trout run so Bill and I spent the day targeting Coho in the low-clear water.

As Bill and I fished we chatted about all things trout and salmon; including his adventures of woggin’ for silvers in Alaska – a conversation that would prominently influence my fishing tactics over the next few weeks.

As the fall run progressed, water levels continued to drop lower with each passing day. My “go to” streamers for normal flow were too heavy for the soft currents even with sink tips removed and un-weighted flies.

Late one afternoon I found myself standing above the head of a pool discussing fishing conditions with a young, talented angler from the area, Jon Scola. Jon and I shared a conversation about current fishing conditions as my un-weighted intruder pattern drifted down and dangled in the film, waking back and forth.   As I fiddled with my sling-pack and talked to Jon a Coho surfaced behind the fly like a brown trout sipping mayfly spinners. The fish grabbed the fly and sunk back into the current. A hook set and quick net job later, Jon and I stood there laughing at what we’d just witnessed.

Needless to say, Jon and I spent the evening, holding our rods high as we skittered intruder flies in the film with great success. That evening I returned home and after some brief online research, I created a dozen foam-bodied dry flies. 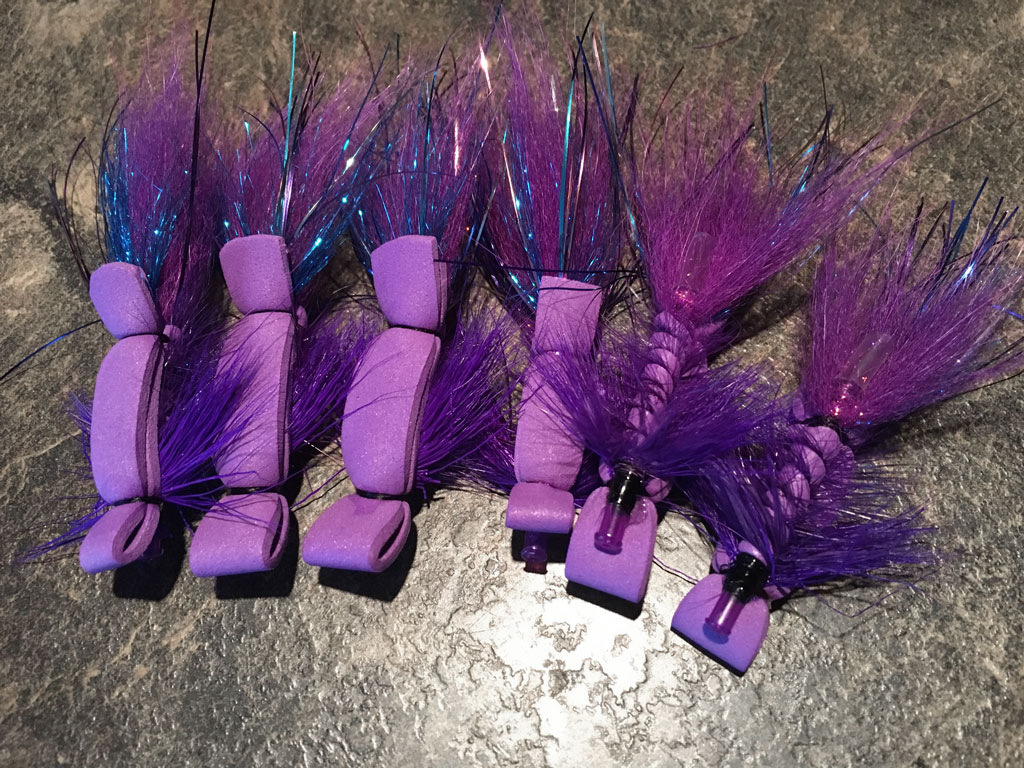 The next day I returned to the river and fished with great passion, excitement and reward. For every fish that charged the fly and ate it, a half-dozen chased and followed the fly. In the coming weeks, I refined some of my steelhead dry fly patterns into a Coho-special that could be stripped, waked or popped with an abundance of flash in the film (fly recipe HERE)..

When I shared my success with other local anglers I was met with great skepticism (a.k.a. code for you’re bat-shit crazy and a liar). I mean who could blame them? In the 90s when I told people I was catching steelhead on traditional wet flies and streamers, they emphatically told me it was an accident at best and I was likely snagging them – but definitely not getting the crushing tug I was feeling. So why would they believe Great Lakes Coho had a propensity to crush a large dry fly like their Alaskan cousins do? Surely, pollywogs only work above the 48th parallel, right?

With my angling credibility is question, I did what any angler would do to save face. I invited the skeptics to the river for some dry fly salmon fishing. As luck, experience and the fish gods would have it, every friend I took to the river for the remainder of the salmon run experienced the thrill of catching a Coho on the dry fly. 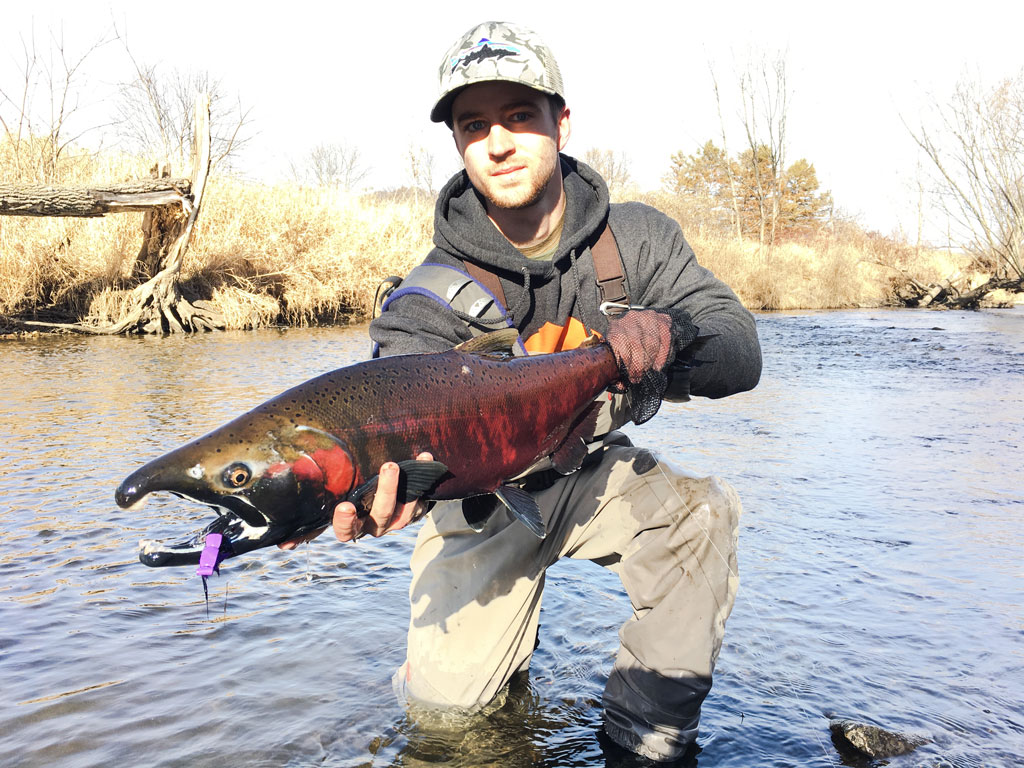 All that said, here are my tips for dry fly fishing to Coho on Great Lakes tributary streams:

As you make your plans for the 2018 Wisconsin salmon run be sure to include a selection of dry flies in your arsenal next fall – you will not be disappointed in the results. As one angler I took fishing said, “this is more than effective, it’s stupid crazy good.”